If not, don’t worry; until a few weeks ago, no one else had either.

But that’s certainly changed, and below I’ll make a case for why Vero just might be the next big thing in social marketing. Though the recent explosion in popularity may indicate otherwise, Vero has actually been around since 2015.

The idea behind Vero is to offer an “authentic” platform. After all, Vero means “truth” in Esperanto.

That means the app is ad-free, and claims to be the “social network that lets you be yourself.”

The app was created by billionaire businessman Ayman Hariri, the son of former Lebanese Prime Minister Rafik Hariri, who said he created the app due to frustration with the privacy policies of ad-based social networks.

Vero has been touted as Instagram-like, though it borrows several features from a range of social channels. Users can share photos, text, videos, URLs, and recommendations.

Its surge in popularity is somewhat inexplicable. Just last week, the network had less than 15,000 users. Today, that number has grown to over 3 million.

So what spurred the sudden surge?

Many think it has to do with user frustration over the recent Instagram algorithm update, which did away with the chronological order of posts, among other things.

How is Vero Different From Other Social Channels?

As stated above, Vero claims to be the more “authentic” social experience.

According to its Manifesto,

Vero is subscription-based, which makes “our users our customers, not advertisers.”

Beyond the difference in philosophies, one of Vero’s biggest selling points for users is its lack of advertisements.

It also lets you choose the level of each connection. Users are given four labels to assign: acquaintance, friend, close friend, or follower. Every time a user shares a post, they can decide which audience will see the post.

There is no algorithm associated with the app, so posts will appear in reverse chronological order.

Beyond that, Vero puts a big emphasis on its privacy policy. According to the app, it only collects minimal data about its users, and will not provide that data to advertisers or third-party sources.

How Does Vero Make Money?

But that will soon change. Though Vero is sticking to its no-ad policy (for now), it does intend to charge users a monthly subscription.

But due to a large number of technical issues for users, Vero announced the app would remain free until further notice: “Due to the large wave of new users joining over the past several days, we have encountered technical issues which have left many experiencing service interruptions…given the service interruptions, we are extending that offer to all new users until further notice.”

When Vero does start charging, it will reportedly only charge a few dollars a year.

Can Brands Succeed on Vero?

What seems to be the biggest hit for brands may actually be their best asset on Vero – the app’s lack of ads.

Though advertising on social networks has exploded over the years (over 30 billion/year is spent on social ads!), there’s compelling evidence that those ads may be doing brands more harm than good.

Mainly, ads have real potential to cause a decrease in customer sentiment, and turn them off your product, rather than the other way around.

And while you may not call Generation Z part of your target audience, they’re projected to make up 25% of the population by 2020; which means like it or not, your brand might need them.

This creates an interesting predicament for brands, as traditional advertising is the go-to for many companies. But to appeal to Generation Z, brands will have to adjust their strategy.

In fact, 31% of Generation Z members have gone so far as to install ad blocking software installed on their desktop.

Vero took all of this information into account when designing the app. “Every decision that we take, every detail we put into the app is all centred around a great user experience,” founder Ayman Hariri told CNBC, “and we felt that by excluding ads out of our business model allows us to focus on that, it allows us to look at our users as our customers, rather than advertisers.”

But that doesn’t mean brands should panic just yet; Vero left brands some options when it comes to reaching potential customers.

While brands won’t be able to advertise directly on Vero, they will still be able to create profiles and partner with influencers to promote their products.

Influencers – generally those with very large, very engaged followings – come in a number of forms. They can be journalists, industry experts, celebrities, popular bloggers, etc.

Influencer marketing is the process of using those influencers to expose your brand and message to their much larger audience. 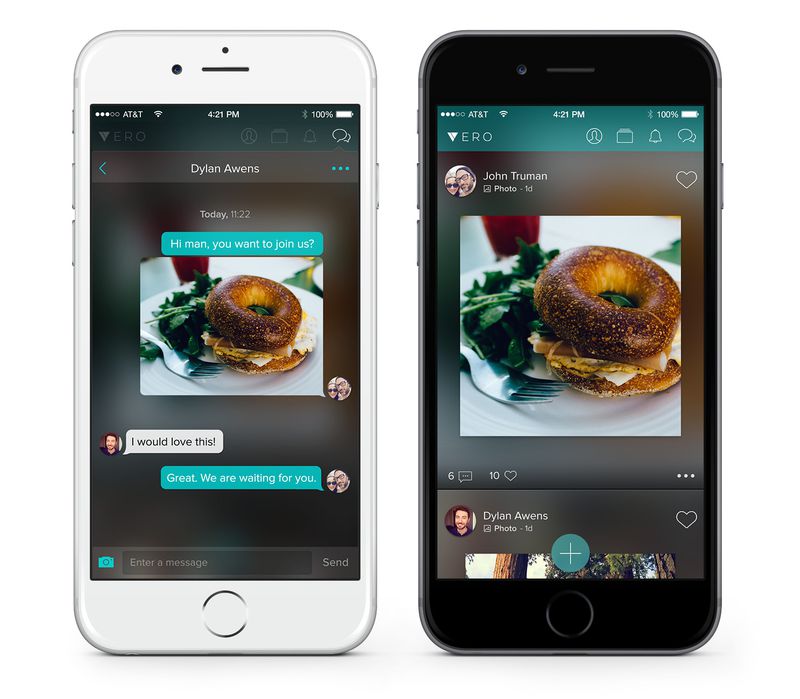 It’s an incredible way to reach an audience and gain its trust, and is particularly effective when it comes to Generation Z.

Reportedly, 85% of Gen Z users will use social media to learn about a product before they purchase it, and 63% of Gen Z members actually prefer the endorsement of social media influencers to traditional celebrities.

So what’s so special about influencer marketing?

It seems to work so well for users because it mimics real relationships. Typically, they’ve followed these for a while and formed a personal connection. They’re not so impersonal as a brand, and recommendation from an influencer they trust carries much more weight than an ad from a brand they don’t know.

After all, 92% of customers take word-of-mouth recommendations over any other form of advertising. That recommendation is exactly what an influencer can provide.

The idea behind influencer marketing goes hand-in-hand with the authentic experience Vero’s trying to create.

Given all the above, it isn’t hard to see the appeal of Vero for users.

How Brands Can Leverage Vero

As more users sign up for Vero, brands will have little choice but to extend to the platform and find more organic ways to reach users.

The good news is that unlike Facebook, Vero isn’t out to hide brand’s posts. In Facebook’s own attempt to improve its user experience, the platform has made it increasingly difficult for brands to reach users organically.

With Vero, all posts have equal chances of being seen – provided the user already follows your account.

For brands, that means creating a strategy that emphasizes Vero follows. Include clear CTAs wherever you can – in emails, blogs, landing pages, etc. Push exclusive content to Vero followers, and as always, post only relative, quality content that speaks directly to your target audience.

And of course, focus on creating an effective influencer marketing strategy.

With any luck, you’ll be partnering and promoting in no time.

Bottom Line: Is Vero Right For You?

Though it’s not a new app, it’s very recent rise to fame means there’s little real data to pull from.

For now, all we can do is to continue to monitor the app’s performance. As its user base grows, you can bet its opportunities for marketers will as well.

If Vero really is the next big thing in social media, brands will have little choice but to explore the app’s features and include it in their existing social strategies.

The good news is this: while it may require a little more creative thinking and planning from brands, the opportunity for real connections with customers is greater than ever on Vero.

By leveraging social influencers and relying on their own messaging to attract followers – not on the amount advertising dollars – brands could very likely build more solid relationships and long-lasting relationships with their followers.

So yes, the marketing process on Vero will likely take a little longer, but it could very well be worth the wait.