This week: a lawsuit could change your content marketing efforts, retail sales are going mobile, and Google changes crawl limits in Search Console. Report: Retailers With Apps See Most Sales From Mobile

It looks like we’ve just hit another mobile milestone.

According to Criteo, retailers with shopping apps get the majority of their sales from mobile platforms. Retailers who have both mobile sites and apps get about ⅔ of their sales on average from smartphones, tablets, or phablets. That breaks down to 44% of sales coming from apps and 23% from websites.

Conversion rates are about 3 times higher on mobile apps. That might be due to a superior user experience.

Criteo also said that 26% of desktop transactions were preceded by a mobile click.

Googlebot will sometimes crawl pages on your website that no longer exist. Have you ever wondered why it does that?

John Mueller answered that question during a Google hangout this past week.

There are three things you need to know about why the bot crawls 404 (non-existent) and 410 (intentionally removed) pages:

Google is being user-friendly. In the event that you accidentally deleted a page and restore it later, Google will return it to the index.

Google Will Move More Sites to the Mobile-First Index Soon

Google has already started moving websites to the mobile-first index. In the near future, it’s going to move a whole lot more.

According to Gary Illyes, Google will start moving the sites in the next month and a half. He made the announcement at Pubcon in Austin, Texas.

Announcement – In the next month and a half or so, Google is moving a LOT of sites to mobile first.@methode #Pubcon

The Big G had originally planned to have all sites moved to the new index by the early part of this year, but it looks like that deadline is going to slip.

There’s also talk that the mobile-first index may never be fully rolled out to all sites.

Federal Judge Rules That Embedded Tweets Can Be a Copyright Infringement

This is moderately frightening.

Some online publications, including Vox Media and Breitbart, ended up in court because they embedded a tweet with a photo of Tom Brady.

The plaintiff, Justin Goldman, had uploaded the photo to Snapchat. It went viral and other people posted it on Twitter.

In response, attorneys for the defendants asked for summary judgment based on the “server test.” That test determines infringement has occurred only if the copyrighted content is hosted on the publisher’s server. In this case, the embedded tweet would have failed the server test and the case would be closed.

But Judge Katherine Forest said that the server test hasn’t been widely applied. As a result, she declined to issue summary judgment.

For now, that means the case will proceed. It doesn’t mean the defendants have lost.

However, if the judge continues to reject the server test and rules for plaintiff, that’s going to be bad news for publishers. They won’t be able to link in-line content without fear of a lawsuit.

Google has made some changes in Search Console.

Once upon a time, you could request that Google crawl 10 of your pages every month and index its direct links. Now, you can only do that with 2 pages per month.

Also, you once could crawl 500 individual URLs per month. Now, you can only crawl 10 URLs per day. 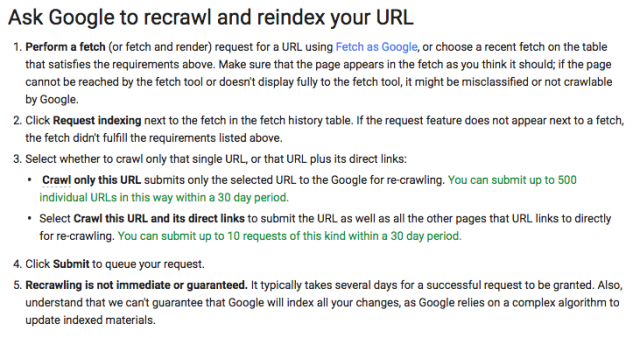 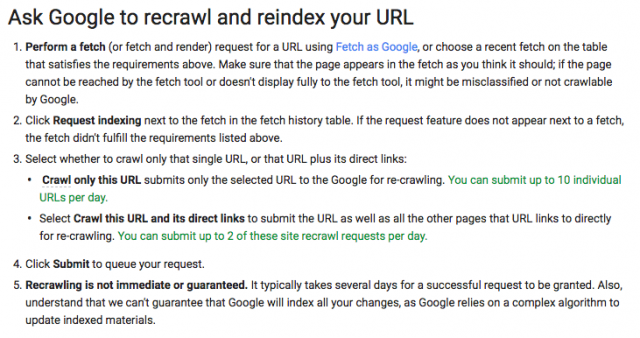 The change probably won’t affect you unless you’re creating new sites every month with hundreds of pages and trying to get them all indexed as quickly as possible.