Twitter’s hit a bit of a rough patch.

But it remains a standing player in the game, and has a made a few changes to keep up along the way.

Here’s how you can create a winning Twitter marketing strategy for 2018. 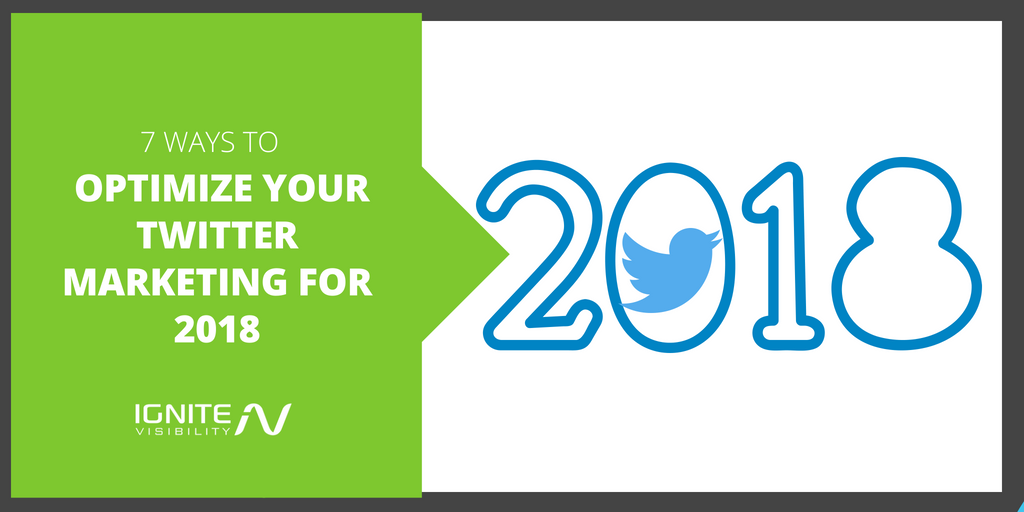 As with most social media platforms, Twitter introduced its own algorithm a little over two years ago.

This isn’t happy news for brands who are used to Facebook algorithm-induced headaches, but fear not – the one for Twitter isn’t nearly as restrictive when it comes to brand messaging.

Until 2015, Twitter showed tweets in reverse chronological order – meaning the most recent Tweets first – before introducing a few changes to it’s updated algorithm.

And it didn’t stop there. Product manager Deepak Rao commented that “Everything we are doing, we are measuring if it’s working or not. We run dozens of experiments every month.”

That means the algorithm – and users newsfeed’s – are in constant flux.

And while we have few details on how the algorithm actually works, we do have a few clues.

Once evaluated, Twitter will sort the Tweets it thinks will be most interesting to you into the top two sections: ranked tweets and “In case you missed it.”

Those not marked as particularly relevant will still appear in your feed, below the first two sections. This will also include suggested Tweets from accounts you don’t follow.

These Tweets, according to Twitter, are selected “using a variety of signals, including how popular it is and how people in your network are interacting with it.”

So, with all the information we have about the algorithm, it stands to reason that engagement is crucial to Twitter marketing.

To trick the algorithm, keep the following ways to optimize in mind.

As we mentioned, Twitter favors the here and now.

It views itself primarily as a news site, meaning it strives to provide users with current, up-to-date information.

As marketers, your goal is to make the ranked tweets section. Remember, that’s the one at the top of the newsfeed.

If a tweet doesn’t receive much attention or engagement in its first few hours, it simply won’t be shown. After all, timing + engagement = ranked tweet.

Finding the best timing is a matter of experimentation. Sure, you can use global studies as a guide. For example, Sprout Social reports the following:

But you’re not off the hook. The above are guidelines, not a cheat sheet.

To find out which times really drive engagement and reach your audience, you need to evaluate your individual tweets, their timing, and overall engagement.

Social software like Followerwonk can help you identify the times when your audience is most engaged. Those active times are the ones you want to test.

If you notice a spike in activity around 12pm, 5pm, and 9pm, try scheduling your tweets for those specific times to see if they drive engagement.

Twitter sees more than 350,000 Tweets sent every minute, making it all too easy to get discouraged about your brand’s chances of success on the platform.

But brands still have one trump card when it comes to organic reach – it’s excellent for customer service.

In fact, 35% of users will boycott a brand if their social media message goes unanswered. Because Twitter is laid out in a real-time, concise manner, it’s ideal for replying to and answering customer queries.

This extends to negative tweets as well. Though many brands fear a bad comment or review, data shows that brands that respond to negative feedback via Twitter actually have a positive impact overall. In fact, 69% of people who Tweeted negatively say they feel more favorable when a business replies to their concern.

Even better, though replies aren’t direct tweets from a brand account, Twitter’s algorithm will often prioritize and feature replies in follower’s newsfeeds if the follow both accounts involved in the exchange.

So if you have a gem of a tweet, don’t let it go to waste. Reuse it instead.

In the Twitterverse, republishing tweets is a common practice. But for it to truly make an impact, you want to make sure you’re only reusing your most popular tweets.

To find your top tweets, a tool like Buffer will come in handy (I also really like MeetEdgar).

In your Analytics section, you should be able to easily identify which of your tweets have garnered the most views and engagement. Twitter Marketing: Use Tools to Find Your Top Tweets

From there, instead of recreating the tweet, you can simply choose to Re-Buffer them (schedule to post again).

Pro tip: It’s best to edit your tweets a bit when reusing Tweets. Include a new image or tweak the messaging before you send it out.

This has a lot to do with Twitter’s new rules regarding duplicate content, which brings us to our next point.

To combat the growing use of spam on the site, Twitter recently introduced a set of new rules aimed at prohibiting the use of duplicate and similar content.

This has a few impacts on marketers.

First, they will no longer be able to produce the same content across multiple accounts.

For example, if you a publish company and have a central Twitter account as well as smaller accounts dedicated to each magazine, you can’t publish the exact same (or very similar) tweet to each account.

This is especially key to keep in mind for brands that use a form of social automation to schedule and post their tweets.

Second, you can no longer post multiple similar tweets over several hours or days. So if you have a great blog you’re trying to promote, you need to compose several substantially different tweets if you want to promote it more than once on Twitter.

Which is exactly why it’s best to modify any top tweets you intend to reschedule for posting.

Third, you can’t post multiple tweets to a trending topic. This is to combat users from trying to dominate a topic or drive traffic to unrelated accounts or services.

So, if you are posting about a trending topic, always make sure it’s actually related to your brand and the services you provide.

And lastly, you can’t simultaneously perform actions like likes, follows, or retweets from multiple accounts.

Failure to comply with any of the rules above can result in your account being suspended, so if any of it sounds like you, it’s time to rethink your strategy ASAP.

Twitter made waves when it rolled its expanded 280-character limit, doubling its historic 140 limit.

While many marketers may have rejoiced at the opportunity to express their thoughts more thoroughly (and even include branded URLs instead of shortened ones), it may not actually pay off to push the character limit.

The beauty of Twitter has always been the art of the short and sweet tweet. It forced users and marketers to be creative in their post promotion, and in turn kept readers hooked on each tweet.

These short snippets are designed to stimulate the brain and leave us wanting more, in the same way that an intriguing headline or subject line does.

A few years ago, studies showed that shorter tweets with around 110 characters got 17% higher engagement than longer ones – and that was back when the cut-off was 140 characters.

Part of that was due to the fact that tweets that use the full character count were harder to retweet, and required editing before they could be retweeted.

The same will likely prove true, even with an expanded character count. While you may be safe going beyond the aforementioned 110-140 characters, it stands to reason that using the full 280 characters won’t be well received.

Instead, continue to focus on how you can pack as much punch in as little space as possible.

Here are a few tips:

Sad but true: organic reach is declining across the social media board.

As traditional social methods fail to achieve the same results, brands are being forced to turn to alternative methods to gain the attention they need.

But it’s not all bad news. Rather than buying and creating advertisements, Twitter makes it extremely easy to promote popular posts in order to amplify your reach.

So if you have a post that’s been doing well for a while, it may be time to bring a wider audience into the mix.

Promoting is an easy, 5-step method:

As you can see, it’s a fairly straightforward process. But if it still seems like too much, you may soon have access to Twitter Promote Mode, a service that automatically amplifies your tweets and profile to help increase engagement reach.

The service costs $99/month, and is available to those in the United States, United Kingdom, and Japan.

Though much has changed at Twitter, the most important factor for success remains engagement.

As always, Twitter is customer-centric and meant to grow the relationship between brand and consumer.

If you form your strategy with that in mind, you’ll set up yourself for a successful 2018.