How do you use video clip markup and seek markup for SEO? Let’s uncover the details.

Staying In Line With Google’s Guidelines

FAQs About Video Markup for Google

According to Google, structured data is a way for content creators and developers to provide “explicit clues about the meaning of a page.”

As Google continues to prioritize user intent, the nuance in queries becomes more and more important. Structured data helps Google provide more appropriate search results, ultimately enhancing the user experience. Given the fact that they’re the most visited multi-platform web property in the United States, that’s a lot of experiences to focus on.

Together, clip and seek markup enhance Google’s ability to highlight key moments in video, but they do so in different ways.

Want to watch the video instead? Check it out below. 👇 Otherwise, read on to get the rundown on how to use video clip markup and seek markup for SEO:

What Is Clip Markup?

Clip markup is a way for people to inform Google of certain details about their video. Specifically, it gives insight into timestamps and labels for key moments inside of the video.

According to John Mueller, search advocate at Google, “With this structured data markup, a web page can provide information on segments or clips within a video. These segments can then be shown directly in the search results, making it easier for users to go right to a part of a video.” How Google defines clip markup: “Manually mark important segments in your video to help users quickly navigate to specific points in a video.”

How to Use Video Clip Markup

Tell Google about your timestamps and labels by nesting the properties in your VideoObject. It’s not required, but it allows you to pull out a specific clip and ask Google to use it (rather than allowing Google to choose clips based on what the algorithm tells them).

Here’s what Google needs to know:

Here’s what the clip markup looks like in VideoObject schema:

JSON-LD structured data will allow you to build, test, and release structured data for the benefit of user experience and SEO. Other supported formats are Microdata and RDFa.

Mueller said in a YouTube video, “JSON-LD is a Javascript notation embedded in a script tag in the page head or in the body. The markup is not interweaved with user visible text, which makes nested data items easier to express.”

What Is Seek Markup?

Seek markup informs Google about your URL structure. You can let Google know how you’ve positioned the URL structure so the search engine can automatically identify the right moments in your video.

It’s different from clip markup because it calls for Google to identify the highlights rather than doing so yourself. For example, if loads of users can host different videos on your website, seek markup lets you inform Google of how to link to any timestamp on your video. They automatically fill out the rest based on the URL structure you provided.

How Google defines seek markup: “Enable key moments by indicating how your URL structure works, so that Google can automatically identify key moments and link users to those points within the video.”

How to Use Seek Markup for SEO

Like clip markup, seek markup works by having you nest the properties in your VideoObject. This tells Google it can link to a specific point in your video.

Here’s what the seek markup looks like in VideoObject schema: 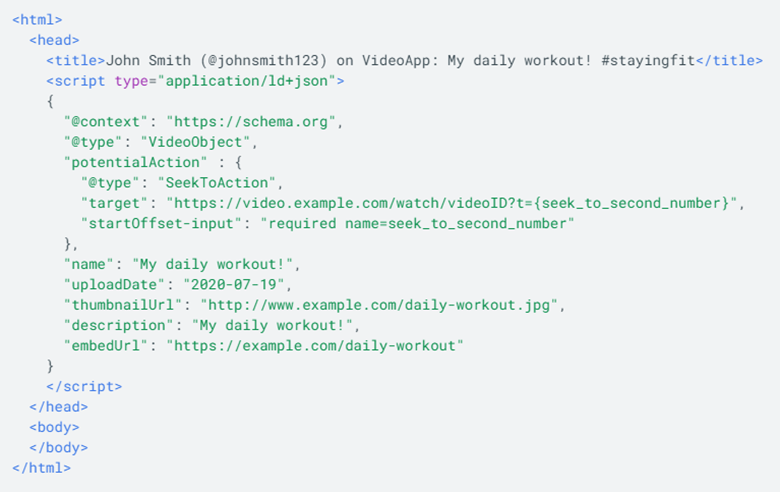 It’s important to follow guidelines for video markup so you don’t get flagged by Google and ultimately squash your SEO attempts.

Keep the following six guidelines in mind as you work:

FAQ About Video Markup for Google

1. Are clip and seek markups live yet?

Clip markup is out of beta mode, but we’re still waiting on seek markup to be released for use. Google says they hope to see seek markup generally available soon, though it’s still in pilot.

2. Are clip and seek markups the only type of video structured data?

Google has no shortage of structured data, but what about the kind that caters to videos specifically?

In short, clip and seek markups are definitely not the only type of structured data for videos. There’s also BroadcastEvent (which makes you eligible for a LIVE badge) and the limited access ItemList (which helps display carousels), among others.

3. Do you need to validate your code for clip and seek markups before deploying?

You will also want to use the URL inspection tool to test how Google views your videos and pages before asking the search engine to recrawl your content with the structured data in place. you can always submit a sitemap to Google to keep them in the know for any changes you make now or in the future.

4. What happens if there are errors in your structured data?

5. What are the best practices for manually making timestamps on YouTube?

Not all videos are hosted on YouTube, but many are. For YouTube videos, you can add timestamps in the video description following a specific format. In a list, label the timestamp. Follow it up with the video time in a parenthetical. You’ll format the video time as 00:00:00 for hour:minute:second.

Here’s how that might translate on a Google search results page: VideoObject is the schema you’ll insert your clip and seek markup properties into, most likely using JSON-LD. Visit the Schema.org page on VideoObject to check that your properties are correct. This ensures your markup works as intended.

There are a lot of recommended properties you can insert into VideoObject to help Google better understand your video’s purpose. Ultimately, this helps to improve the overall user experience.

Should You Equip Your Videos with Structured Data Like Clip and Seek Markup?

The long answer? Clip markup and seek markup are two methods to get your videos more visible inside of Google search. SEO for videos is a unique thing to tackle. As such, content creators and developers should make the most of anything that can organically expand their reach.

You ought to equip your videos with clip and seek markup, and whatever other structured data you can access. Your viewership and engagement will respond accordingly.

Now that you know how to use video clip markup and seek markup for SEO, you may be looking for more ways to utilize schema for your content…

Check out this video on Q&A schema to get started: