This week: YouTube lets you customize your channel’s appearance, Facebook is testing an email marketing tool, and Bing rolls out a site scanner. Even though overall martech spend will decrease by 4% through the end of next year, Chief Marketing Officers will increase investments in marketing automation solutions by 3%. That’s according to a new study by Forrester.

The report also says that CMOs will cut spending on demand-side platforms and data management platforms. They’ll focus instead on optimization tools.

“With budgets and headcount reduced for the foreseeable future, marketers are focusing on conversion rate optimization, lead nurturing and customer retention campaigns,” says Benjamin Shapiro, host of the MarTech podcast.

Additionally, Forrester predicts that overall marketing spend at the beginning of 2022 will lag 2019 spend by 30%.

That’s going to cause marketing services to lose as much as $15 billion by the end of 2021. Marketing companies will reduce staff by 30% and cut salaries by the same amount through the end of this year.

Now you can update your YouTube channel to reflect your business. The company says it’s taking a mobile-first approach to the customization experience. That means your new layout will look great on a smartphone or tablet as well as a desktop platform.

YouTube also announced the release of Creator Mixes: they’re video suggestions that appear in the “Up Next” section of the website and app. In a report released this past week, Google announced that its webspam team finds more than 25 billion spammy pages every day.

However, the company said that more than 99% of Google’s search results are spam-free.

The Big G claims that user-generated spam decreased by 80% in 2019.

Google also says that it caught more than 90% of link spam.

This past week, an observant digital strategist noticed that her Facebook business page now includes a Marketing Emails section. She took a look inside and posted some screenshots. 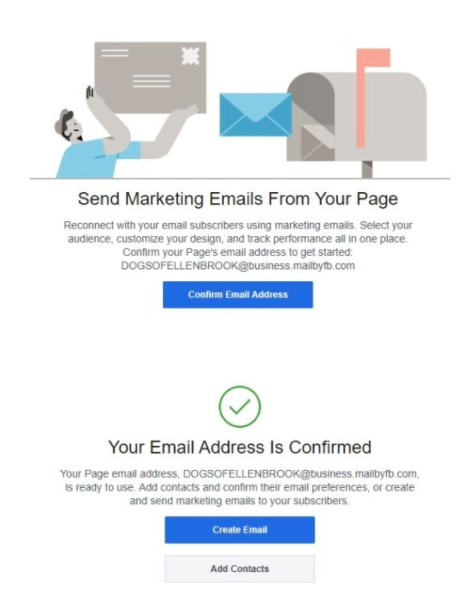 It looks and feels just like any other email marketing platform. You can add customers individually or upload them via a spreadsheet.

Then, you compose your subject line, message body, and preview text. Facebook will take care of distributing the emails.

As of now, the new tool is in test mode and only available to a limited number of users. If those users like what they see, expect the email marketing feature to go global at some point in the coming months.

If you thought you were free and clear of copyright issues just because you embedded an Instagram photo on your site, think again. There’s a lawsuit pending that could change everything.

An Instagram user is suing Newsweek for embedding a photo. Newsweek had previously reached out to the user and asked for permission to post the photo on its website. When the user declined, Newsweek assumed it could do an end-run around on a copyright claim by embedding the photo instead.

Instagram, for its part, issued the following statement: “Our platform policies require third parties to have the necessary rights from applicable rights holders.”

What that means is this: if you find yourself on the wrong end of a lawsuit after embedding an image, don’t expect Instagram to come to your defense.

The Newsweek case is still working its way through the courts. However, the current judge appears to think the Instagram user has a legitimate complaint.

A recent update to Google My Business (GMB) allows you to add service-specific hours.

Although that’s a fairly typical use-case, Google probably added the feature in response to “the new normal” we face in this post-COVID economy.

This past week, Snapchat confirmed that it rolled out dynamic ads worldwide.

The company had been testing the ads in the UK. Companies that participated in the trial phase include Adidas, Farfetch, and Topshop. If you’re unfamiliar with dynamic ads, they’re feed-driven ads that show products to users based on criteria. Facebook and Google have run dynamic ads for years.

Now you can use Bing Webmaster Tools to scan your site for technical SEO issues.

The Bing site scanner will identify problems such as:

And more. It looks like a fairly comprehensive tool. However, it will only let you scan a maximum of 10,000 pages per month. So if you’re running a huge ecommerce site, you might have to split your scans up and run them once a month.

In case you missed the news, SEMRush added a guest blogging service to its portfolio of offerings. That didn’t sit well with Google.

John Mueller himself said that service created unnatural links in violation of Google’s terms of service. This past week, SEMRush announced that it’s discontinuing the guest blogging service.

“We are pausing the test of our guest blog post editorial/placement service, which will require more time to implement given the volume of orders received and our commitment to excellence,” the company said in a statement. “The service is about content development and editorial coordination. We do not pay publishers for placed articles and not selling links.”

Don’t expect that service to return.

If you’re on a disavow kick these days, be advised that it probably isn’t helping your site rank. That’s according to Google’s John Mueller.

During an interview this past week, Marie Haynes asked Mueller if preventative disavowing will help with rank.

“I think that would be very rare,” Mueller replied.

To clarify: the advice here applies only to sites that aren’t subject to a manual action. Obviously, sites that are in the doghouse can get out of it by disavowing spammy links.

Here are a few action items based on this week’s rundown: