Are you worried about making costly tweaks to your Google Ads campaign experiments?

Well, that worry is over with Campaign Draft and Experiments, Google’s split-testing platform for Google Ads experiments.

Here is everything you need to know about setting up and running campaign drafts and experiments. More and more businesses are turning to Google Ads.

So much so that 72% of marketers plan to increase their PPC budgets.

But in order for it to work so well, digital marketers have to set up and manage those ads campaigns correctly.

That means choosing the right variables and tweaking them over time for optimized performance.

Luckily, each tweak doesn’t have to come with high (and expensive) stakes.

Instead, Google allows you to run Ads experiments before applying changes to existing campaigns. This article covers everything you need to know about how to set and run your own Google Ads experiments.

So what is a Google Ads campaign?

Put simply, it’s an advertising campaign run through a Google Ads account, usually composed of a group of ads.

Google describes it as “a set of ad groups (ads, keywords, and bids) that share a budget, location targeting, and other settings. Google Ads campaign experiments are often used to organize categories of products or services that you offer.”

Ads are generally grouped by product type or location, with each ad in a group usually targeting a separate keyword.

For example, at Ignite Visibility we offer SEO, social media, Amazon optimization services, and much more. So, we could choose to run a different Google Ads experiment campaign for each service.

The biggest benefits of Google Ads are  that:

In fact, the Google Economic Impact Report shows that businesses make an average of $2 in revenue for every $1 they spend in Google Ads experiments.

Google Ads gives you control over how much money you spend.

There’s no minimum amount required; rather, you set daily a budget for how much you intend to spend.

While there are multiple bidding strategies to choose from, most stick with CPC (cost-per-click), which means you pay every time someone clicks on one of your ads.

Of course, other factors do come into play – most notably how expensive your chosen keywords are.

Generally speaking, the more competitive the keyword, the more you’ll spend per click.

For a deeper look at how Google Ads bidding works, take a look a this video.

Is Google Ads Worth the Investment?

If you want customers to find you, Google Ads Experiments are your best bet.

That’s because 86% of customers use the internet to find a local business.

But why pay, rather than focus on SEO? Because:

But because campaigns can get costly, many hesitate to make significant changes to existing campaigns – especially those that have proven successful – without knowing the change is worth the investment.

Which is why first, you do a test run.

Campaign drafts and experiments were introduced in February 2016, and gave the advertisers the ability to test changes to their campaign experiments before pushing them live. 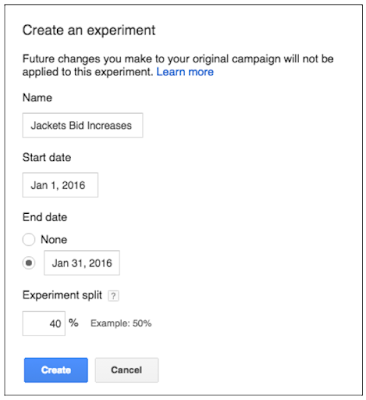 Drafts allow you to prepare changes to a campaign without impacting its performance.

They’re a replica of your original ad setup where changes and updates can be applied before they go live. They serve as a preview.

How to Use Drafts in Google Ads Experiments

Drafts are often created to show clients or bosses how potential changes will impact a campaign.

For example, if you’re tasked with updating the strategy of an existing campaign, you can use drafts to show how changing different features will impact the overall result.

From there, drafts can then be applied to an experiment or the actual campaign.

Keep in mind, not all features can be changed in a draft, including:

You may create up to 5 drafts for the same campaign, though only one can be used as an experiment in Google Ads at a given time.

Note: Campaign drafts are used to create an experiment, and are different than those created in AdWords Editor.

Google Ads Experiments are the middle-man between drafts and live campaigns.

Once you’ve created a draft, you can choose to run it as an experiment in Google Ads before applying it to your actual campaign.

How to Use Google Ads Experiments

First, you set how long you would like the Google Ads experiment to run and choose how much of the original campaign’s budget and traffic you’d like to use on it.

Then, when a prospect lands on a search page, Google will randomly choose whether your experiment or actual campaign appears, based on the split you selected.

Throughout the Google Ads experiment advertisers can monitor results on their performance scorecard.

If you’re happy with the results, you can apply them to the existing campaign or convert the Google Ads experiment into a new campaign – with the same dates and budget – while pausing the original one.

If not, no harm no foul. You can continue the original campaign and choose to run a new draft as an experiment.

Google notes that it comes down to personal preference when choosing how to proceed after an experiment, though the majority of the time you’ll probably want to update the original. Doing so will apply all changes to the original and keep the campaign’s history intact.

Converting will add a new campaign to your account, causing you to lose the original campaign’s pre-experiment history.

Users will find many benefits associated with the Campaign Drafts and Experiments function.

One of the biggest is certainly the ability to test campaign effectiveness while risking less of your budget.

This is especially true if the campaign in question has already proven successful. Understandably, many would be reluctant to gamble on a new strategy.

But with Google Ads Experiments, you can share a small portion of your already-established budget to test the new direction.

If it doesn’t work there aren’t any extreme repercussions; simply discard the draft. If it does, you’ll have the confidence and proven results needed to move forward.

Another pro tip: It gives multiple people the ability to make changes to an ad campaign.

That means if you work with multiple people – think copywriters, managers, SEO specialists – everyone can go in on their own time and make changes to the drafts.

And of course, the feature eliminates much of the guesswork often involved with significant ad changes by allowing you to show a preview of all changes before they take place to key decision-makers.

How to Set Up a New Google Ads Draft

Like most of Google’s user functions, the process here is pretty intuitive.

To begin, you’ll need to have an existing campaign running in Google Ads.

Once you’ve signed in to your account, you’ll select Drafts & Experiments from the page menu on the left, then click Campaign Drafts. Next:

How to Set Up AdWords Experiments | Step 1

How to Set Up AdWords Experiments | Step 2

How to Set Up AdWords Experiments | Step 3

If you choose not to run a Google Ads experiment on the draft and instead want to apply it directly to the original campaign, use the following steps:

Simple as that. With just a few clicks, you have an updated campaign ready to go.

How to Set Up Google Ads Experiments

If instead you decide to run a Google Ads experiment on one of your drafts, you’ll again want to start by logging into to your Google Ads account.

If at any time during the duration of the test you are unhappy with the results, you can close it out by simply changing the end date.

But hopefully, you find your Google Ads experiment successful. In that case, you can choose to apply the experiment to your original campaign.

Or, you can convert the Google Ads experiment into a brand new campaign if you wish to keep the original as is. Doing so will pause the original.

Deciding What to Test with Google Ads Experiments

The ability to test can be a huge time and money saver, as long as know what to test.

Using the Google Ads Experiments to perform A/B tests will help you find the right combinations and drive the highest conversions.

Though not an exhaustive list, the factors above could have big impacts on your ad performance.

Which ones you ultimately decide to test will depend on company or client’s overall goals.

Measuring the Success of Your Google Ads Experiments

You’ll want to keep close tabs on the success of your experiment throughout its run.

Luckily, Google makes it easy to do so.

In your Google Ads account, you’ll find a performance chart under the All Experiments header.

This is where your experiment’s performance can be monitored, with arrows used to show which metrics are performing better or worse than your original campaigns.

Google offers a full breakdown of how to use and interpret the charts here. How to Interpret ADwords Experiment Results

They also make the following suggestions :

While Google Ads makes the setup and execution processes as simple as they can be, errors can occur.

Typically, drafts and experiments will be successful, but sometimes they can fail after the asynchronous call is executed. To know whether or not a draft or experiment was successful, you will need to check the status of the operation.

It is important to also note that some errors will not come to light in preview mode. A few failures will only be noticed once the campaign is running.

Failures not being displayed in preview mode are typically due to the fact that the operation cannot reach the campaign.

To avoid this issue, you need to check the logs underneath the campaign script after running the Google Ads experiment.

Is Google Ads Experiments Worth It for Small Businesses?

If you’re now thinking that running a Google Ads experiment might not be worth it for your small business, you should know a few more details.

If you’re using Google Ads, there’s no reason you shouldn’t be running experiments.

It’s a fantastic tool for testing and optimizing each campaign for the best results possible, without any of the commitment that comes with a blind change.