This week: Google glitch gives SEOs a scare, LinkedIn makes it easier for you to reach the right prospects at the right time, and only a handful of websites meet Google’s speed tests.

So now you can reach out to brands, convince them about your level of influence on Facebook, and ask for a sponsorship. Here’s what Facebook has to say about the new feature: “Facebook has built monetization tools across different surfaces to help individuals and organizations generate reliable revenue that’s sustainable over time, and we’re excited to launch a set of tools that will enable communities, specifically, for the first time, to meaningfully monetize their engaged group audience by partnering with brands to create ‘branded’ posts.”

In the interests of full disclosure, Facebook tags the sponsored posts with a “Paid Partnership” notification.

If you’re running a virtual storefront on Shopify, you’ll want to make sure that your site ranks well. This past week, Shopify released a new app that will help you do just that. The app displays your Core Web Vitals, a series of metrics that tell you how quickly your site loads.

Beginning in 2021, Google will use those metrics as ranking factors. All other things being equal, quicker sites will probably move to higher positions in the search engine results pages (SERPs) than slower sites in the same niche.

WordPress quietly inserted a new security feature into the latest release of its world-famous CMS.

It’s a security measure that you might not have even realized you need. But if you’re using WordPress with loads of plugins, you probably need it.

That’s because some unscrupulous actors purchase plugin software and insert malvertising and backdoors into sites that use the plugin. However, they need to update the plugin to get their code on the websites.

And if WordPress blocks the update, their code won’t get deployed. That’s why the new level of protection is so valuable.

That seems to be the attitude of a lot of webmasters these days, anyway. According to an analysis by Screaming Frog, fewer than 15% of websites pass Google’s Core Web Vitals assessment.

And plenty of pages are failing that assessment. Truth be told: it’s probably due to WordPress. That software has grown so big and bulky that it slows sites down.

Now you too can appear in search.

Google rolled out people cards this past week. They’re digital business cards that show up in search results. People cards include your name, location, place of business, social media links, and even a website link.

They’re designed for working professionals, artists, performers, influencers, entrepreneurs, and anybody else who wants to increase their personal visibility online.

A caveat, though: people cards are only available in India.

If you live there, you can just type “add me to search” in the search bar to get the ball rolling on creating your own card. Just make sure you’re logged in to Google with the correct account.

Google May Lose Market Share Because of an Android Update

It would be ironic if Google lost business because of an update to its own operating system. But that might happen.

According to a study commissioned by DuckDuckGo, Google’s mobile market share could take a hit when Android introduces search preference menus. This is probably old news to you by now, but Google gave search strategists a scare this past week.

That happened when the search giant rolled out a bug that really messed up search results. 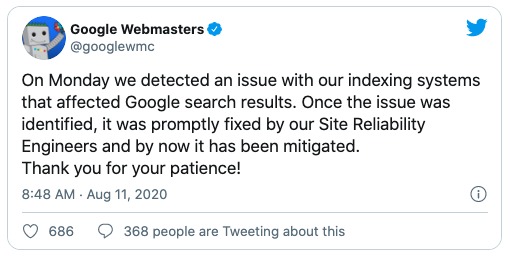 Many SEOs thought it was an update and concluded that all their hard work for the past several years had amounted to nothing.

Fortunately, Google caught the issue in fairly short order and resolved it.

Following the fix, the company posted this tweet on the Google Webmasters account: “On Monday we detected an issue with our indexing systems that affected Google search results. Once the issue was identified, it was promptly fixed by our Site Reliability Engineers and by now it has been mitigated. Thank you for your patience!”

All is good now.

Now you can use Google’s Rich Results Test tool to validate Article markup.

Article markup can give Google more info about the content you’re pumping out. As a result, you might earn a higher rank.

The tool will tell you if your markup is in line with what it’s expecting. If there’s something wrong, Google will tell you what it is and where it’s located. Then, you make the necessary changes.

You can use Article structured data to mark up news articles and blog posts.

The conventional wisdom is wrong. At least if you believe Google. During a discussion on Twitter this past week, somebody informed John Mueller that SEOs like to use guest posts for backlinks. He went on to say that “Google does give preference to domains with more backlinks.”

Mueller did not agree with that.

“Those links have zero value,” he tweeted. “It’s a waste of time if you’re just doing it for the links.”

This is nothing new. Google wants you to focus on delivering quality content as your primary SEO strategy.

Google: You Don’t Need to Mix Follow and Nofollow Links

Speaking of backlinks, Google says you don’t need a mix of follow and nofollow links to appear “natural.”

If you visit some of the blackhat forums, they like to promote the idea that you should include follow and nofollow links in your backlink profile. That will make it clear to Google’s algorithm that you’re a real site that’s totally not trying to manipulate the search engines in any way.

According to Google’s John Mueller, though, it’s “not true” that you need a mix of the two.

Pay attention if you’re in the B2B space. LinkedIn added a couple of new alerts to Sales Navigator that could help you land more business.

First up is the Buyer Interest Alert. It will signal when employees or decision-makers at a saved account engage with your LinkedIn page or website. Next is the Relevancy Alert. It uses artificial intelligence to surface the most important alerts so you don’t miss out on great opportunities.

Additionally, LinkedIn is adding a new “Outreach” listing in Lead Lists. That will give you an overview of your activities with each contact.

Wait. Is LinkedIn turning into a CRM?

Here are few things to put on the plate for next week: